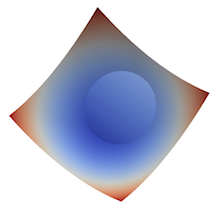 This thesis is part of the continuity of collaborations between IRSN (Institute for Radioprotection and Nuclear Safety) and I2M (Institute of Mathematics of Marseille) on the development and analysis of discretization schemes in time and space for numerical resolution of certain fluid mechanics problems. The first part of this manuscript concerns the equations of Saint-Venant. We propose an analysis of a numerical scheme for the Saint-Venant equations with background gradient, with a Heun scheme in time and a MUSCL scheme in space for finite volumes on shifted mesh grids (MAC scheme). The stability of the scheme is demonstrated, as well as a result of “Lax” consistency for a general operator of nonlinear convection on shifted meshes, which applies to all systems of conservation laws. Numerical tests are performed to establish the validity of the diagram. We are also interested in the same equations, but with a source term that models the Coriolis force for modeling geostrophic flows. The MAC upwind discretization is compared to a finite element discretization of the Rannacher-Turek type with a stabilization which makes it possible to reduce the diffusion. Numerical results make it possible to compare the two diagrams with a resolution of the Godunov type. Then, we consider the Saint-Venant equations in one dimension of space coupled with an equation called “Exner”, which models the transport of sediment. A regularization of the friction law makes it possible to obtain an energy balance. Several sediment flow formulas already proposed in the literature are studied. The resulting equations are discretized by an explicit diagram by equation in time and a diagram with meshes shifted in space. Everything is illustrated by numerical results. The second part is devoted to the numerical resolution of a turbulent blast simulation model governed by reactive Euler equations. The combustion modeling is based on a phenomenological approach: the flame propagation is represented by the transport of the characteristic function of the burnt zone, where the chemical reaction is complete; outside this area, the atmosphere remains cool. Numerically, we adopt a penalization-type approach, that is to say by using a finite conversion rate with a characteristic time tending towards zero with the steps of space and time. Here again, the numerical scheme is mesh-shifted, and the time algorithm consists in first solving the mass balances of chemical species, then the mass, momentum and energy balances of the fluid. Stability properties are demonstrated, and we observe numerically that the procedure of penalization converges. An exact solution to the problem of the spherical deflagration modeled by the reactive Euler equations.
Participer à la réunion Zoom :https://univ-amu-fr.zoom.us/j/92492559625?pwd=bG5VbEhObzd1LzlPOWphaTRHdzVwQT09ID de réunion : 924 9255 9625
Code secret : voir mail