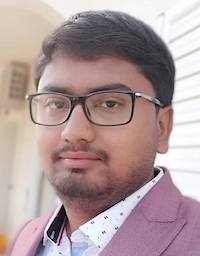 The present work deals with the transitional wake dynamics and nonlinear fluid-structure interaction behavior of flapping wings in the low Reynolds number regime through high-fidelity
numerical simulations. This talk is largely focused on identifying the dynamical transition routes to chaos in the unsteady flow-field of rigid and flexible flapping wings and unraveling the underlying flow-physics behind the chaotic transition. A quasi-periodic (QP) route is established in the near-field of a pitching-plunging airfoil as the dynamic plunge velocity (kh), proportionally the amplitude-based Strouhal number, is gradually increased. Further, it is observed that the QP state gets interspersed with intermittent bursts of aperiodicity preceding chaos. Following this, the role of near-field vortex interactions in making the unsteady flow-field transition from periodicity to chaos is investigated. A dynamic interlinking of the near and far-field wake transitions shows that the deflected jet undergoes a switching of direction at its far-end due to the propagation of the QP trigger from the nearfield. Eventually, this near-field QP state gets interspersed with aperiodic bursts which trigger the direction flipping of the immediate couple at the trailing-edge resulting in a full reversal of the deflection direction of the wake. Finally, the wake topology becomes chaotic through a series of rapid aperiodic jet-switching. A similar aperiodic transition is observed in the 3D flow-field beyond a considerably high value of kh. The underlying complex interactions among leading-edge, trailing-edge, and tip vortices are analyzed in detail with the aid of Qcriterion iso-surfaces. This study establishes that the transition to aperiodicity in the wake of a flapping wing is indeed a physical phenomenon and not an artefact of the 2D flow assumption. In order to understand the nonlinear FSI dynamics of flapping wings, the flow-induced vibration of a 2-DOF passively flapping airfoil is investigated at a low value of the structure-to-fluid added mass ratio. This flexibly mounted flapping system is seen to undergo a chaotic transition through a Ruelle-Takens-Newhouse (RTN) route. Nonlinear time series analysis techniques have been implemented to characterize the different dynamical states present in the course of transition and to establish the associated transition route to chaos.