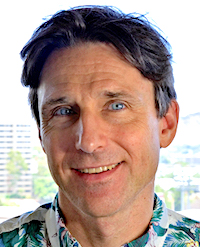 The Coconut Rhino Beetle is an invasive species to Hawaii since 2013 and the goal of the State of Hawaii with funding from the US Department of Agriculture is eradicated the beetle. The beetle has few known predators in Hawaii and feeds upon the coconut palm trees. It has been cause of devastating effects on the palm trees in Guam stripping them of their leaves and resulting the loss significant amounts of vegetation. The impact on the agricultural and tourisms industries to Hawaii if the invasion unmitigated could result significant financial losses. The insect burrows in the ground during the day and is only active in flight making traditional detection and tracking methods of the dispersal patterns difficult to implement. Acoustic detection for ground activity and flight offer potential due to relative low cost and array gain. Moreover, tracking with close proximity to traps could provide additional information on navigation and flight techniques. Given that the flights of the large size Coconut Rhino Beetles for specific to foraging and feeding.

We are able to measure and analysis the time frequency characteristics of the chirp sounds which reveal an interesting, novel harmonic structure not reported previously. Thee sounds from flight due to wing beat are not well understood for this invasive species. The sounds of flapping wing insects are typically dominated by a fundamental with higher harmonics though the underlying structure and aero-acoustics beyond the frequency and amplitude are not well understood, especially for beetles. However, the aerodynamics and acoustics of invasive species of beetles are of interest in terms of fundamentals of flight and detection methods. The Coconut Rhinoceros Beetle (Oryctes rhinoceros) and the Oriental Flower Beetle (Protaetia orientalis) were studied during tethered flight with synchronized microphone array measurements and high speed video (1000-10,000 fps). The larger Coconut Rhinoceros Beetles have fundamental ~ 50 Hz with distinctive torsional wing rotation compared to Oriental Flower Beetle (~100 Hz). Computational fluid dynamics simulations were performed using the unsteady compressible flow solver (CAESIM, Adaptive Research, Inc.) using a high resolution (TVD) methodology. Models of the wing flapping motion were accomplished using mesh deformation techniques with the flapping following from rotation with prescribed bending and coupled rotation and translation from the wing’s hinge position. Fluid structure interaction with respect the wing’s flexibility are possible for extended experimental comparison.