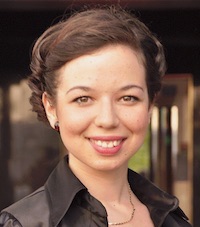 We study the real Milnor fibre of real bivariate polynomial functions vanishing at the origin, with an isolated local minimum at this point. We work in a neighbourhood of the origin in which its non-zero level sets are smooth Jordan curves. Whenever the origin is a Morse critical point, the sufficiently small levels become boundaries of convex disks. Otherwise, they may fail to be convex, as was shown by Coste.

In order to measure the non-convexity of the level curves, we introduce a new combinatorial object, called the Poincaré-Reeb tree, and show that locally the shape stabilises and that no spiralling phenomena occur near the origin. Our main objective is to characterise all topological types of asymptotic Poincaré-Reeb trees. To this end, we construct a family of polynomials with non-Morse strict local minimum at the origin, realising a large class of such trees.

As a preliminary step, we reduce the problem to the univariate case, via the interplay between the polar curve and its discriminant. Here we give a new and constructive proof of the existence of Morse polynomials whose associated permutation (the so-called “Arnold snake”) is separable, using tools inspired from Ghys’s work.