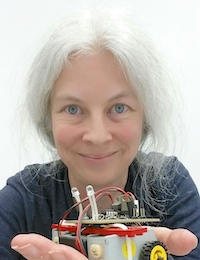 The Drosophila larva is an important model system for understanding the interaction of neural circuits and body mechanics in directed locomotion. Its behaviour is often described as alternating between straight peristaltic crawling (runs) produced by a central pattern generator (CPG), and lateral bending to reorient (turns), either for random exploration or to move up or down a sensory gradient (taxis) by making appropriate ‘decisions’ when to switch. To better understand the control of motion we have developed a mathematical model of larval segmental mechanics, and show that (in the absence of damping and driving) the mechanics of the body produce axial travelling waves, lateral oscillations, and unpredictable, chaotic deformations. Adding a simple reflexive neuromuscular circuit to this model to counter friction gives rise to forward and backward peristalsis and turning, even though the nervous system has no CPG and neither senses nor drives bending motions. This produces life-like exploratory behaviour, and by adding a reflex to enhance bending in response to sensory input, we can produce directed taxis that closely resembles the observed behaviour of larvae in a sensory gradient.